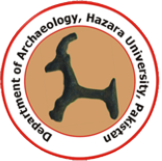 Studies on Gandhara Mirrors: The Specimen from Shaikhan Dheri

Shaikhan Dheri, the ancient Pushkalavati (modern Charsadda), one of the earliest cities of ancient Gandhara, was excavated by A. H. Dani, who along with other important cultural artifacts, discovered a metal mirror, in typical Gandhara style, highlighting skillful metallurgical art of the time. This paper highlights the initiation of mirrors at Anatolia from ore-minerals which later on transformed into metal in due course of time. The earliest evidence of metal is known from Mehrgarh, Baluchistan from its Neolithic context. There is every possibility for the beginning of mirror from that site or region. Introduction of mirrors in South Asia originated in Harappan sites most likely from South Baluchistan. From Harappan sites of Pakistan and India the use of mirror was popularized in mature Harappan Phase, (2600-1900 BCE).

The Shpola Stupa of Khyber Pass: The Twentieth- Century Record of a Proposed Conservation Project

The Shpola stupa of Khyber Pass is one of the biggest Buddhist sepulchral mounds of Gandhara, situated on the main road, which connects Peshawar with Afghanistan. It was a well-preserved monument until the 19th century of the Common Era; however, with the annexation of Khyber into the British Indian Empire, the stupa suffered from illicit diggings. The contractor of the road reutilized its building materials, while the antiques hunters dug out its dome in the hope of finding treasures. In the first half of the twentieth century, the Political Agents of Khyber Agency tried to preserve the stupa from further deterioration, however, the plan postponed due to various reasons. The present study is focused on a set of archival documents, dealing with the failed conservation project of the Shpola stupa of Khyber Pass in the twentieth century.

A Coin Hoard of Samantadeva in the Sub Regional Office (SRO), Peshawar Museum

The present paper deals with a coin Hoard that belong to a renown Hindu Shahi ruler Samantadeva. The coins of this hoard were confiscated and now lie in the Sub Regional Office (SRO), Peshawar Museum, Pakistan. In number, these are fifty-one coins known in silver, billon and copper metal. They represent a common Hindu Shahi coinage design of bull and horseman on the obverse and reverse respectively

The Case of Togau Ware: An Analytical Study

Balochistan is archeologically rich and possesses several types of ancient wares. Togau ware is one of the wares which has been abundantly found at many sites. It has at least five types. Togau ware is a Chalcolithic pottery. This paper presents a simple review and analysis of Togau ware in Balochistan. The paper also incorporates a general discussion about the recent survey Panjgur carried out by the principal author. It also analyzes the six Togau type ceramics found in the personal collection of Sultan Ahmed Shahwani following a general comparative study of them. It also generally discusses illegal digging of the cultural objects from Togau sites in the province.

Tracing the Origin and Nature of Gandharvas and Apsaras

Generally, the class of Gandharvas and Apsaras is referred to heavenly musicians, servants, and entertainers. This class of entertainers has been mentioned not only in religious texts but also in other ancient written records. The present paper attempts to define these divine beings and their duty and also to trace the origin of gandharvas and apsaras mentioned the ancient religious and other texts.

This paper explores the pottery assemblage from Hindu Shahi sites in the north-western Pakistan, collected during the landscape survey in the districts of Swat, Lower Dir, Malakand Agency and Buner in Khyber Pakhtunkhwa Province, Pakistan. During the survey, an area of nearly 2500 square kilometres was investigated using systematic techniques, resulting in the documentation of 225 Hindu Shahi sites. Preliminary analyses of the pottery assemblage revealed vessels with nine types of rims and ten types of decorations. Some rim types and decorations are widespread, showing broad regional similarities and design choices across the study area. In contrast, others are relatively rare and limited to particular localities, reflecting possible socio-political and economic considerations. The similarities within pottery forms and their distribution patterns suggest an integrated socio-political system, wherein production and usage of pottery was systematized within a short period of time. .

The Sikh era (1799-1849 CE) in the Northern Part of Pakistan, which includes present day Hazara Division of Khyber Pakhtunkhwa, is generally known for the multiple past expeditions carried out under the leadership of Ranjeet Singh to suppress the rebellions and overwhelm small independent states. With this short reign full of revolts, it was not possible for the Sikh state to commission monumental construction projects like their predecessors (i.e. the Mughals).....

Nowadays, lots of ancient sites are threatened by diverse anthropogenic actions. The absence of documenting of these ancient sites, mainly in developing nations like Pakistan, has resulted in the loss of a valuable part of history. The purpose of this research is to investigate one such site, the Derawar fort, a massive square fortification situated in Tehsil Yazman of Bahawalpur District, Punjab, Pakistan, in terms of its historical importance in the Cholistan desert and also the possible dangers it confronts nowadays....

Even in modern age of Pakistan, Sufi saints are reminisced by visiting shrines and performing various rituals. Dargahs, which emerged as socio-religious institutes are being used by people across the country as a meeting place of Sufi brotherhood. Sufi dargahs not only used religiously but they also draw secular tourists and others for socializing. Even when the textual sources are missing, these rituals and commemorative monuments associated with the dead are the sources of exploration and studding the societal values of the region as well as art and architecture.....

Shah Anayat, a spiritual leader, saint and reformist belonged to the Syed family of Multan. The marvels associated with the saint are clear depiction of the divine strength of his character. Shrine of Shah Anayat had been an epicenter of spiritual accomplishments and religious stimulation for many years. Being located at one of the prime locations of natural scenic city Muzaaffrabad the shrine totally pays gratitude to the environment. He played an exceptional role as a preacher of Islamic principles in this region and devoted his whole life being a role model of teaching Islamic values like peace organization and fraternity to the entire society.

Excavation at the Buddhist Site of Zar Dheri 2021: A Preliminary Report

Zar Dheri, a well-known Buddhist complex is located in Tambah, a small village on the right side of Shinkiari-Dadar road in District Mansehra. This important Buddhist complex was for the first time recorded and published by Mr. Harold Hargraves, the then Superintendent, Archaeological Survey of India in 1922-23. The site had remained at the mercy of the plunderers till it was revisited by a joint team of archaeologists from the Department of Archaeology, Government of Pakistan and Tokyo National Museum Japan during their collaborative field research carried out in Hazara region in 1990s